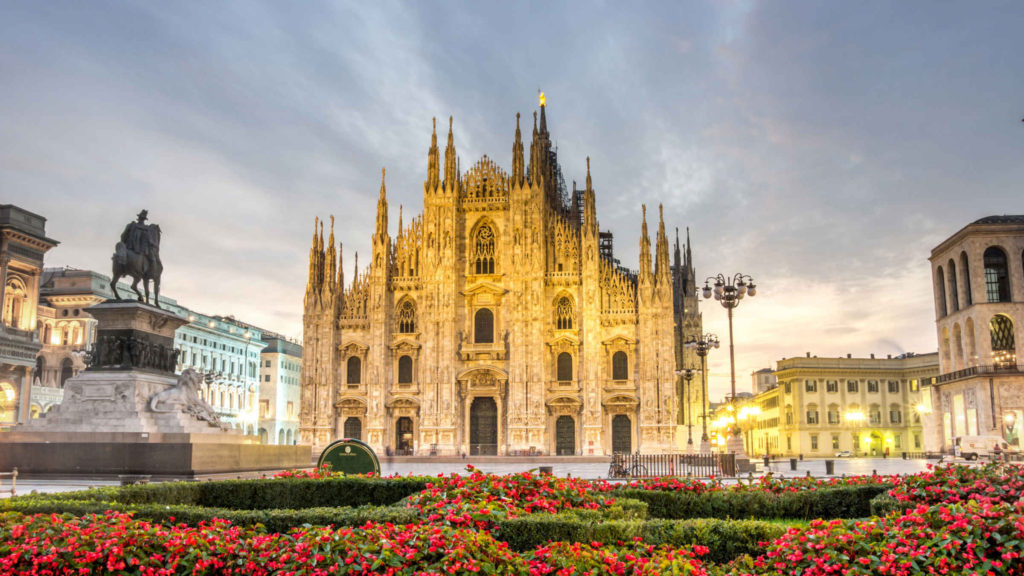 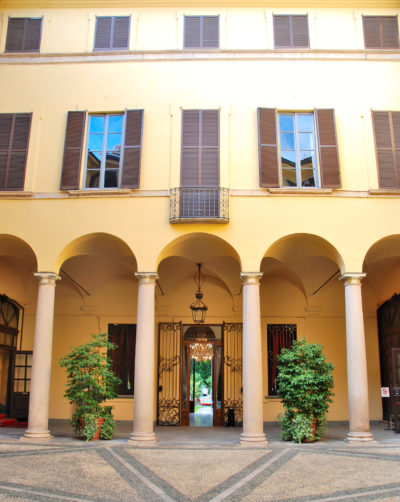 There are two Andalusian style balconies and a portal with granite doorposts. Its style is typical of the 17th century It has well preserved architectural frescos in perspective on the groun[…]

The palace stands in the rectangular square on the southern side of the cathedral; it is a wide building with a Neoclassical front and two lateral wings. It is of ancient origin and during i[…] 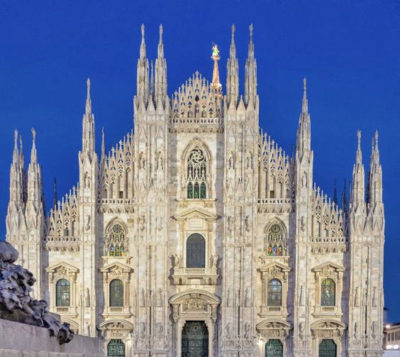 The cathedral was started in 1386. It is a magnificent example of a very special interpretation of Gothic architecture by the Lombards. It rises like a huge mountain of marble but richly orn[…] 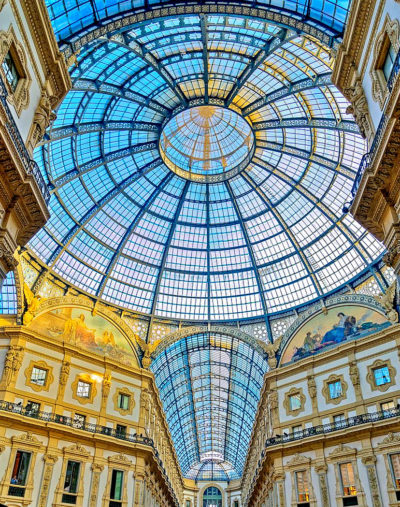 The famous Galleria connects the plaza of the Cathedral to the Piazza della Scala. Building began in 1865 under the direction of Giuseppe Mengoni who died in 1877 after falling from the scaf[…] 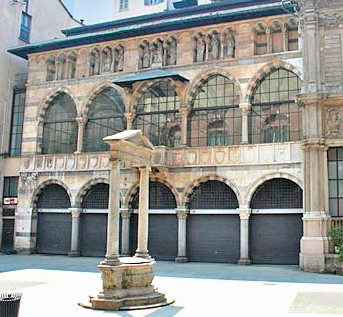 The Loggia of the Osii was built by Matteo Visconti in 1316. It was restored in 1904 and the deformations of the XVIIth. and XVIIIth. centuries were removed. The façade, with two superimpose[…] 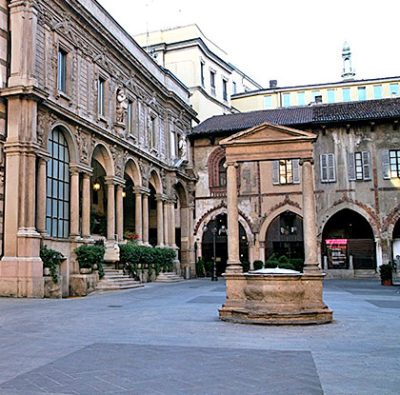 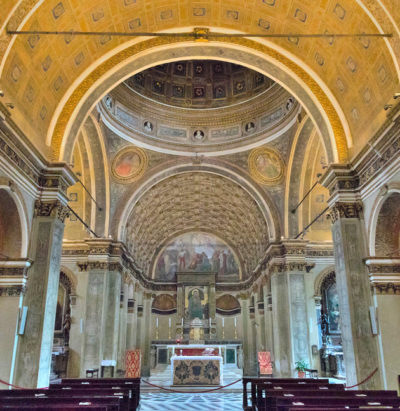 This church stands on Via Torino close to the Piazza del Duomo. The original building was erected at the time of Archishop Ansperto (10th century). Of this, only the chapel (Cappella della P[…] 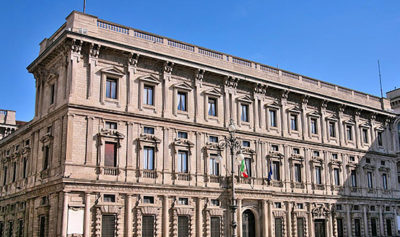 This was built between 1553 and 1558 by Galeazzo Alessi for the Genoese merchant. Tommaso Marino The courtyard walls and columns are richly adorned with modeled concrete heads, flowery festo[…] 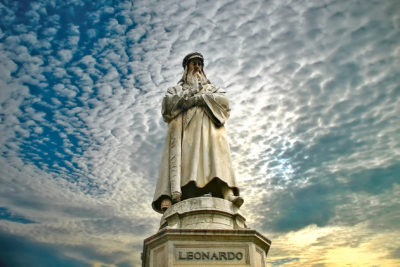 In the center of the plaza we find the Monument to Leonardo da Vinci by Pietro Magni (1872). Four statues of the Milanese disciples of Leonardo, Marco d’Oggriono, G. Antonio Boltraftio[…] 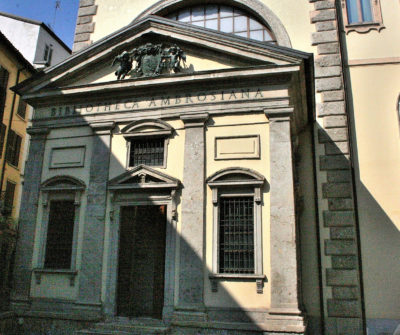 https://www.ambrosiana.it/en/
Founded bv Cardinal Federico Borromeo in 1609 and built by Fabio Mangone and Francesco Maria Richini, the Ambrosian Library is one of the most remarkable demonstrations of the great Federico[…] 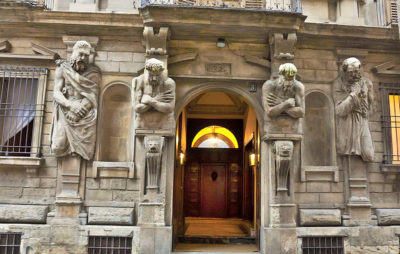 The “House of the Omenoni” was built by Leone Leoni and is one of the most interesting late sixteenth century buildings in Milan. It has eight caryatids called “Omenoni’’ (big me[…] 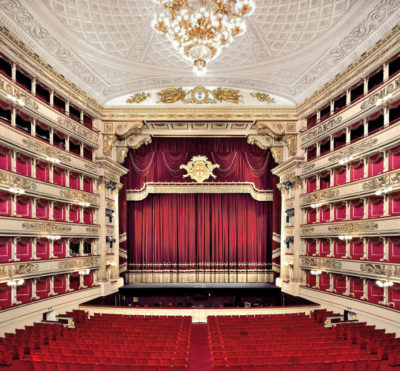 http://www.teatroallascala.org/en/index.html
The building with severe lines stands on one side of the Piazza della Scala. In the center of the square is the monument to Leonardo da Vinci by the sculptor Pietro Magni (1872). Around the […] 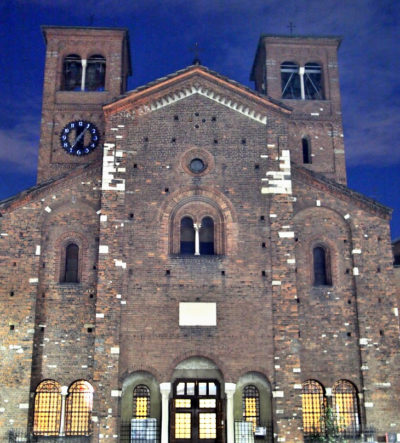 It has been remodeled many times since its founding in 1030; the faÇade however, has been restored to its primitive Lombard style. A vast crypt, that extends the length of the church, is use[…] 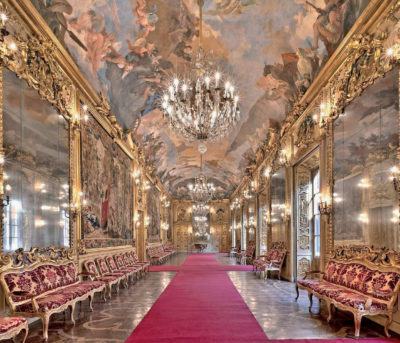 This splendid palace, built in the early decades of the 18th century contains a magnificent gallery of tapestries and a famous fresco painted by Giambattista Tiepolo about 1740, “The Chariot[…] 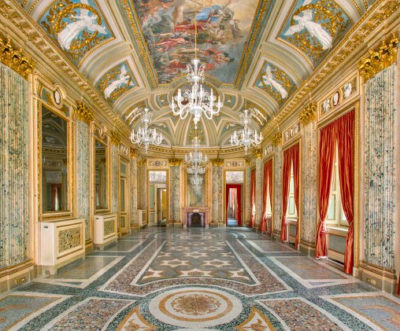 Piermarini constructed this palace for the princes, Antonio and Alberico Barbiano of Belgioioso between the years 1772 and 1781. The façade has three stories of twenty-five windows or doors […] 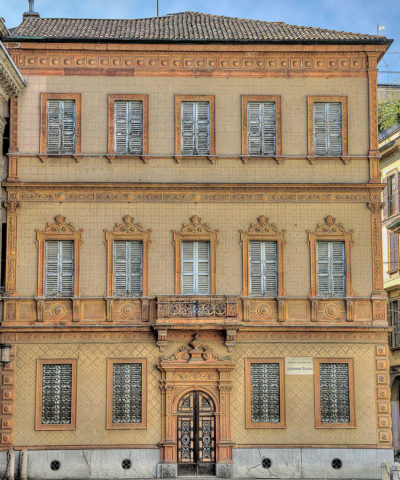 In Piazza Belgioioso, other than the building which gives it its name, we can see Palazzo Besana and Manzoni’s house. This latter is very dear to the people of Milan as their own great poet,[…] 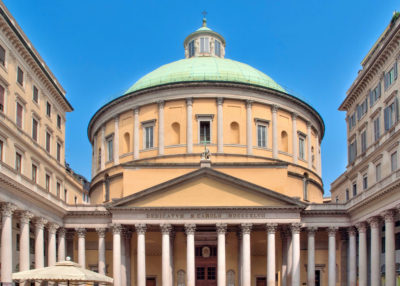 The present day basilica of St. Carlo was built on the site of the old church and convent ol the Servants of Mary. When preparations for Ferdinando I of Austria’s entrance into Milan were be[…] 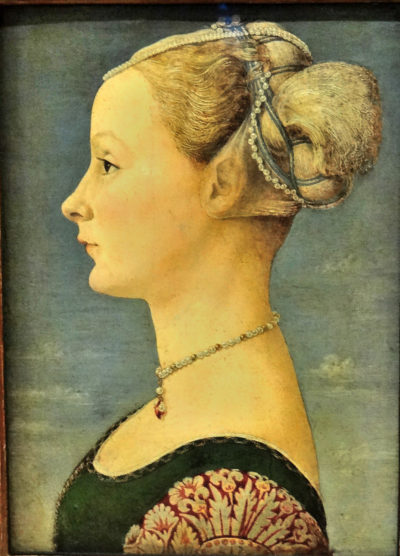 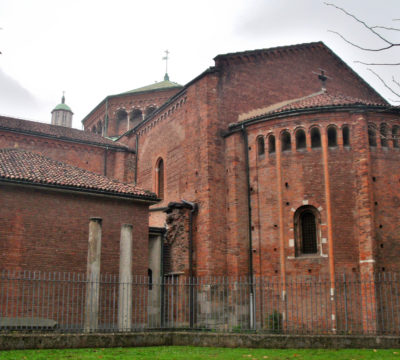 Founded in the 4th century, it was rebuilt in Romanesque style after the fire of 1705; the Chapel of San Lino contains important 10th century frescos. […] 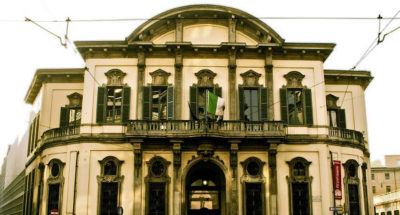 This mansion was originally constructed in the Barocchetto style. In 1736, the architect Croce enlarged on the initial 17th century plan and it was considered one of the most luxurious of th[…]
Showing 1 - 20 of 75 results
«1234»
Sort by: Newest First 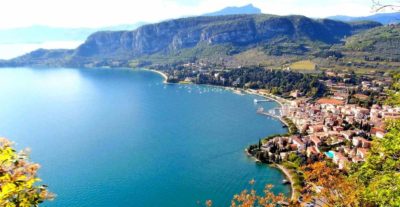 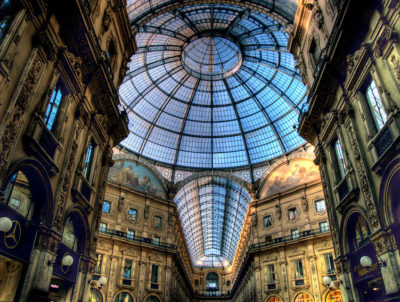 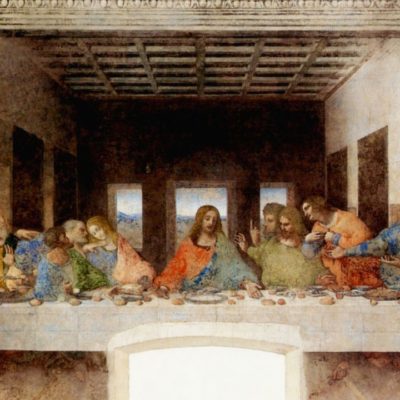 from €99.00 EUR
Duration: 3 Hours
Organized by: City Wonders Ltd.
Bookings to see the Last Supper are restricted and sell out rapidly..
702 Reviews 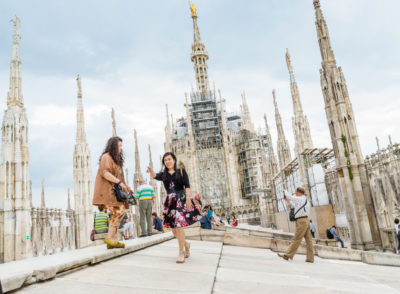 from €16.50 EUR
Validity: 3 Days
Organized by: Veneranda Fabbrica Duomo di Milano
Explore the 6 centuries old cathedral of Duomo in all ways with this ticket..
13.753 Reviews 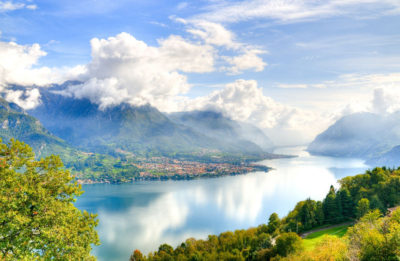 from €85.00 EUR
Duration: 10.5 Hours
Organized by: Autostradale Viaggi
Be ready for a shopping adventure at the biggest shopping mall of Europe.
3.583 Reviews 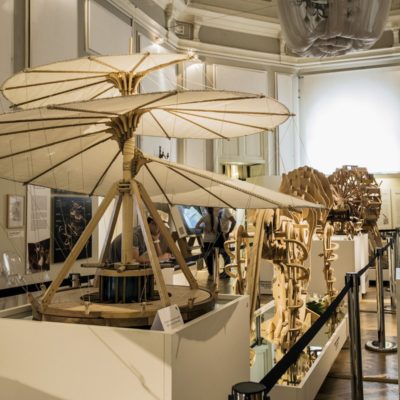 from €14.00 EUR
Seller: Tiqets
You will see models of 200+ machines designed by Da Vinci like a rapid-fire crossbow..
138 Reviews 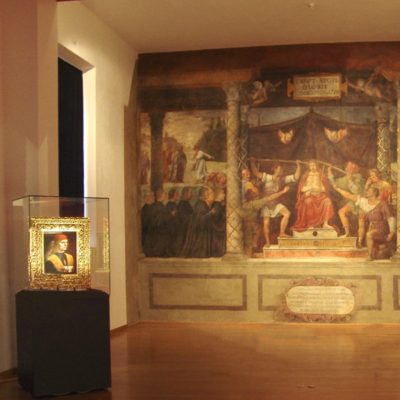 from €16.50 EUR
Seller: Tiqets
See the works of many famous artists such as Titian, Raphael, Botticelli and..
106 Reviews 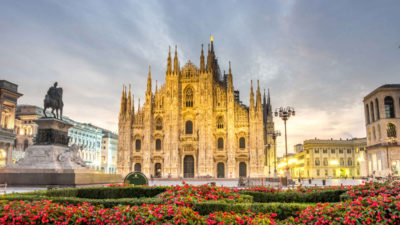